Introduction
Tuberculosis (TB) has been declared a global public health emergency by the World Health Organization (WHO).1  Human TB is a
chronic bacterial infection caused by Mycobacterium tuberculosis although similar disease can be due to other mycobacteria
such as M. bovis and M. avium. In individuals who have compromised body immunity such as in uncontrolled diabetes, HIV
infection, cancer and lymphoma, normally opportunistic mycobacteria such as M. kansasii and M. intracellularis may cause
infection.2
HIV infection has contributed significantly to the resurgence of TB especially in sub-Saharan Africa.3 TB/HIV co-infection is bi-
directional and synergistic and is often designated as the ‘cursed duet’. HIV leads to immunosuppression and is the strongest of
all known risk factors in the development of TB. The course of HIV infection is accelerated subsequent to the development of
TB.
A lot of studies has been done on the clinical features of TB/HIV co-infection worldwide but very little is known about the
prevalence and socio-demographic characteristics of the co-infected patients. Thus, despite the funds being provided by the
WHO and donor agencies for the fight against TB and HIV, the impact made has not been commensurate because the true
picture of those severely affected by the scourge is not clear from the existing data. The objective of this study is to assess the
prevalence and socio-demographic characteristics in Enugu, Enugu state, south-eastern Nigeria in order to provide scientific
information that will have policy relevance and which will aid HIV management programmes and TB control programmes in Nigeria.

Materials and Methods
Study Design
This study was designed as a retrospective study. A protocol was adapted from the National TB register of the Chest Unit,
UNTH. Other information not available in the register were sought from the folders of patients.
Study Area
The study was conducted in the Chest Unit of University of Nigeria Teaching Hospital (UNTH), one of the largest health
institutions in Enugu, the capital city of Enugu state, south-eastern Nigeria. The study area is located at latitude 6’21°N and
longitude 7’28°E and covers approximately 102 km2 with a population of 688 862 (2007 estimate). There are two distinct seasons,
the wet and the dry; the former is from April to September and the latter is from October to March. The average atmosphere
temperature is 30°C.
Study Subjects
The study was folder-based and the study subjects were the case files of patients diagnosed of TB in the Chest Clinic in the
period between January 2008 to December 2009. The patients comprised of people living in Enugu metropolis, neighbouring
towns and those referred from neighbouring states.
Sampling
The type of sampling used was the multi-stage probability sampling. The first stage involved selecting Enugu North through a
simple random sampling from the Local Government Areas in Enugu State. Then, Chest Unit, Enugu, was selected from all the TB
centers in Enugu North through a simple random sampling also. Third stage involved selecting the folders of all the patients that
presented in the Chest Unit, UNTH, between January 2008 and December 2009.
Data Collection
Data was collected from the TB register of the Medical Records of Chest Unit, UNTH, Enugu and the folders of patients that
presented at UNTH Chest Unit between January 2008 and December 2009. A protocol was drawn and the necessary information
was obtained from the individual folders and recorded in the protocol. The following areas were covered in the protocol: age of
patient, address, sex, occupation, marital status, type of housing, type of TB, LGA of origin, treatment outcome, co-morbidities.
Data Analysis
Data was analysed using the SPSS version 15.0 software programme. Appropriate statistical tests were employed.

Discussion
TB/HIV co-infection remains a major contributor to the disease burden in developing countries. In sub-Saharan Africa where the
HIV epidemic is very severe, TB is reportedly exacerbated by HIV infection. This was evident from the present study where the
prevalence of TB/HIV co-infection was as high as 30%. This is slightly higher than the 28.12% gotten by Ige et al at Ibadan in
2005.4 These values are by far higher than those obtained from India (16.52%), Ukraine (10.1%), Uganda (5%) and the United States
of America (1%).5 This high prevalence may be attributed to the low standard of living, inadequate shelter with attendant
overcrowding, low awareness levels of TB/HIV co-infection in Nigeria.
The male preponderance of TB infection observed in this study is consistent with the findings of previous investigations in Alor
Setar, Malaysia,6 Warsaw, Poland7 and Abakaliki, Nigeria,8 where male to female infection ratios were 3:2, 2:1 and 2:1
respectively. In contrast, a higher percentage of female TB patients are co-infected with HIV (33.3%) when compared to male co-
infected patients (27.7%). This may due to the fact that in south-eastern Nigeria, females appear to be more likely to access
health services and be notified under the Directly Observed Therapy Short course (DOTS).8
Odunukwe et al in a study done in south-western Nigeria in 2006 reported that 43.7% of TB/HIV co-infected patients belonged
to the 30-39 age group.9 This is in keeping with the result of this study in which the 30-39 age group had the highest prevalence
(34%). This may be explained by the fact that this age group is the most sexually active, which is an important risk factor in HIV
transmission. Also, the high prevalence among the male and married group (31.9%) is supported by the findings of the afore-
mentioned study, that the male and the married are sexually more active than the other groups.9
Interestingly, it was observed in the study that while 23.9% of the co-infected patients were traders, only 2.1% were
professionals. The awareness of the diseases and possession of basic information on their risk factors and modes of transmission
among the professionals may have accounted for the low prevalence in the group. Most of the co-infected patients lived in 2-3
room apartments (29.8%) or in 1-room apartments (18.1%) thus supporting the widely known fact that overcrowding and its
attendant consequences has increased the TB scourge. In addition, more than half of the co-infected patients live in urban
areas (55.3%), which are usually characterized by overpopulation, low standard of living, inadequate shelter, overcrowding,
sexual promiscuity and drug abuse, all predisposing factors to TB and HIV. This may explain why sub-Saharan Africa and parts of
south-east Asia with teeming urban population are experiencing escalating TB/HIV co-infection rates.3

Conclusion
It is important to state that HIV is really threatening the control of TB in developing countries like Nigeria. Thus, it should be
mandatory to screen every HIV patient for TB and vice versa. All HIV treatment and care settings in Nigeria should ideally be
designed and built with TB infection control in mind. As a preventive measure, control should be engineered towards reducing
the spread of TB among this highly susceptible group. All Highly Active Anti-Retroviral Therapy (HAART) centres should also be
equipped and staffed to provide TB DOTS.
Also, operational research is urgently needed to assess different approaches to the care of TB/HIV co-infected patients.
Besides advanced research, a lot more need to be done at all possible levels to combat the menace of this dreadful co-
infection. Advocacy groups like civil society groups and student bodies in Nigeria and beyond should take up TB/HIV as an
urgent issue. These groups can serve to educate communities about the basic symptoms of TB and in a sense ‘de-medicalize’
TB, thus bridging the gap between experts and the communities.
In a nutshell, suffice it to say that early diagnosis, high level of suspicion and effective and aggressive treatment of TB/HIV co-
infection according to the available guideline, strong commitment, a focused approach as well as strong collaboration between
national TB and HIV control programmes is the need of the hour in Nigeria.

Acknowledgements
The authors appreciate the guidance of Dr. Ekwueme of the Department of Community Medicine, UNTH, who supervised this
research work. The authors also acknowledge the assistance rendered by the staff of the Chest Clinic, UNTH, in sorting the
patients’ folders during data collection.

About the Author: admin 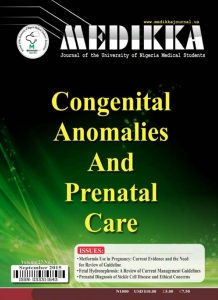